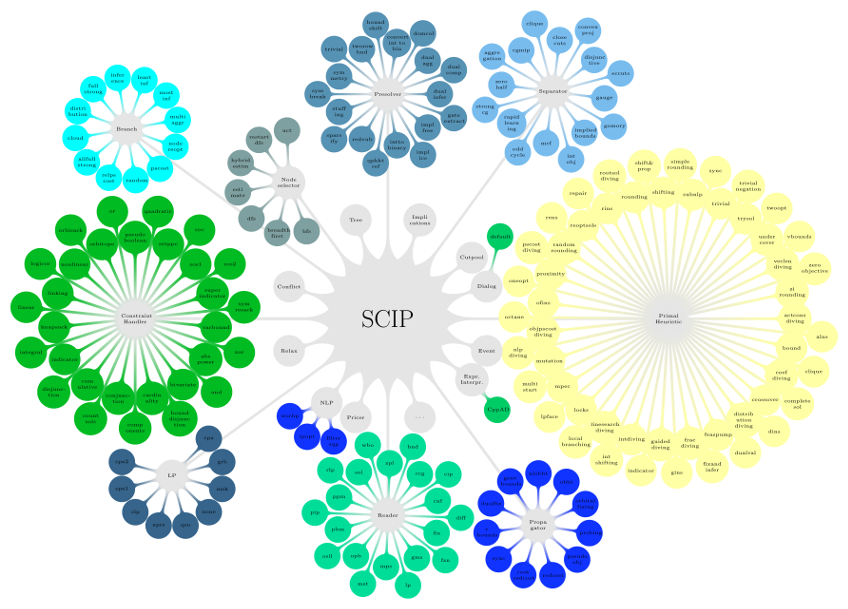 By default, SCIP comes with a bouquet of different plugins for solving MIPs and MINLPs.
If you are new to SCIP, want to dive in and don't know where to begin, then have a look at the Getting started page.

A similar technique is used for solving both Integer Programs and Constraint Programs: the problem is successively divided into smaller subproblems (branching) that are solved recursively.

SCIP is a framework for Constraint Integer Programming oriented towards the needs of mathematical programming experts who want to have total control of the solution process and access detailed information down to the guts of the solver. SCIP can also be used as a pure MIP and MINLP solver or as a framework for branch-cut-and-price.

SCIP is implemented as C callable library and provides C++ wrapper classes for user plugins. It can also be used as a standalone program to solve mixed integer linear and nonlinear programs given in various formats such as MPS, LP, flatzinc, CNF, OPB, WBO, PIP, etc. Furthermore, SCIP can directly read ZIMPL models.

There are a number of interfaces to SCIP:


For further details, check out the interface section of the documentation.

Also, a number of LP solvers can be linked and used by SCIP:

What is the SCIP Optimization Suite?


The user can easily generate linear, mixed integer and mixed integer quadratically constrained programs with the modeling language ZIMPL. The resulting model can directly be loaded into SCIP and solved. In the solution process SCIP may use SoPlex as underlying LP solver.

Since all six components are available in source code and free for academic use, they are an ideal tool for academic research purposes and for teaching mixed integer programming.

A further extension of SCIP in order to solve MISDPs (mixed-integer semidefinite programs) is available from TU Darmstadt: SCIP-SDP. 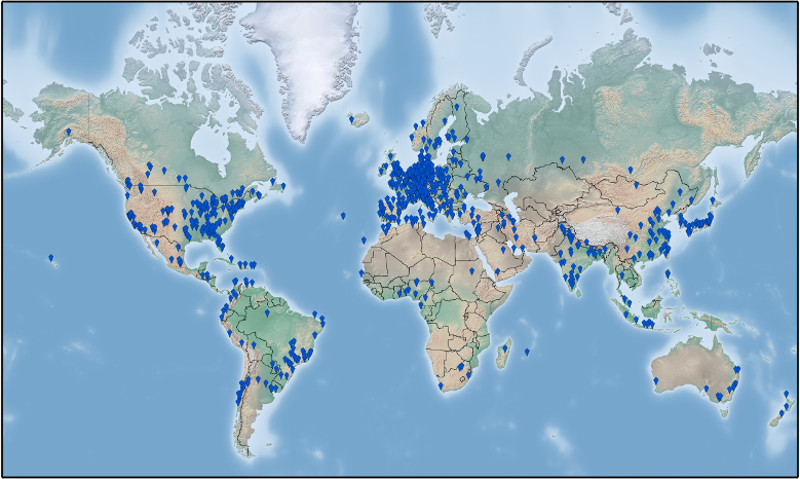 Any publication for which SCIP or the SCIP Optimization Suite is used must include an acknowledgement and a reference to one of the following articles, depending on the version used:


A more detailed description of SCIP can be found in

However, for the latest developments, please consult our series of release reports.

Since November 4, SCIP is licensed under the Apache 2.0 License.

Releases up to and including Version 8.0.2 remain under the ZIB Academic License as indicated by the files contained in the releases. The new license applies from Version 8.0.3 onwards.

The files you can download here come without warranty. Use at your own risk!

You can either download SCIP alone or the SCIP Optimization Suite (recommended), a complete source code bundle of SCIP, SoPlex, ZIMPL, GCG, PaPILO and UG.

You can also download precompiled executables of SCIP with which you can solve MIP, MIQCP, CIP, SAT, or PBO instances in MPS, LP, RLP, ZIMPL, flatzinc, CNF, OPB, WBO, PIP, or CIP format.
Note that these executables do not include the readline features (i.e., command line editing and history) due to license issues. However, you can download the free readline wrapper rlwrap to provide this missing feature to the executables.

If you use conda, you can install the components of the scipoptsuite using the conda packages.

Every now and then there are SCIP Workshops where developers and users come together to discuss different approaches and implementations.

The next workshop will be held on the occasion of SCIP's 20th anniversary on November 4th, 2022. Click here for further information. Sign up for the SCIP mailing list to get notified about future events.

If you know about further projects or papers that use SCIP, please let us know.

For general information or questions about SCIP please write to the SCIP mailing list scip@zib.de after subscribing to it at the SCIP mailing list page. For licensing questions, please see the license section of the web page and the contact provided there.
Trouble compiling SCIP from source? Please check the build documentation before sending an email.
For questions about our SCIP interfaces on GitHub please open an issue in the corresponding repository.

We are also watching the SCIP tag on stackoverflow.com and will answer your questions there. Note that we will not answer faster only because you posted the same question both to stack overflow and the mailing list.

SCIP has more than 500,000 lines of source code and is definitely not bug free. If you'd like to help us improve SCIP, visit our bug submission page and file a bug report in English or German.

We are thankful to many people who over the years have contributed code to SCIP, among others:

SCIP is developed in cooperation with

© 2023 by Zuse Institute Berlin (ZIB). For the imprint and privacy statement we refer to the Imprint of ZIB with the following additions and modifications:

The number of SCIP downloads is tracked and used to generate statistics about the downloads and to generate the world map of download locations. The personal information is used to distinguish the number of downloads from the number of users per year that might download more than one version or archive. In addition to the privacy statements of ZIB, we hereby declare that your name and affiliation recorded for the SCIP download is used for purposes of granting licenses and for statistics about software downloads, and is processed and stored on our server for the duration of a year.